At first glance, learning the basics about trumpets can seem overwhelming. There’s so many different varieties and options with this particular brass instrument that many tend to not know where to start looking. One good approach to this instrument is by finding out the answer to the question: “what key is trumpet in?”

By finding the answer to this, you can more easily traverse through the other details that you’ll need to know about these instruments. With so much to learn about trumpets, it would be a good place to start learning. 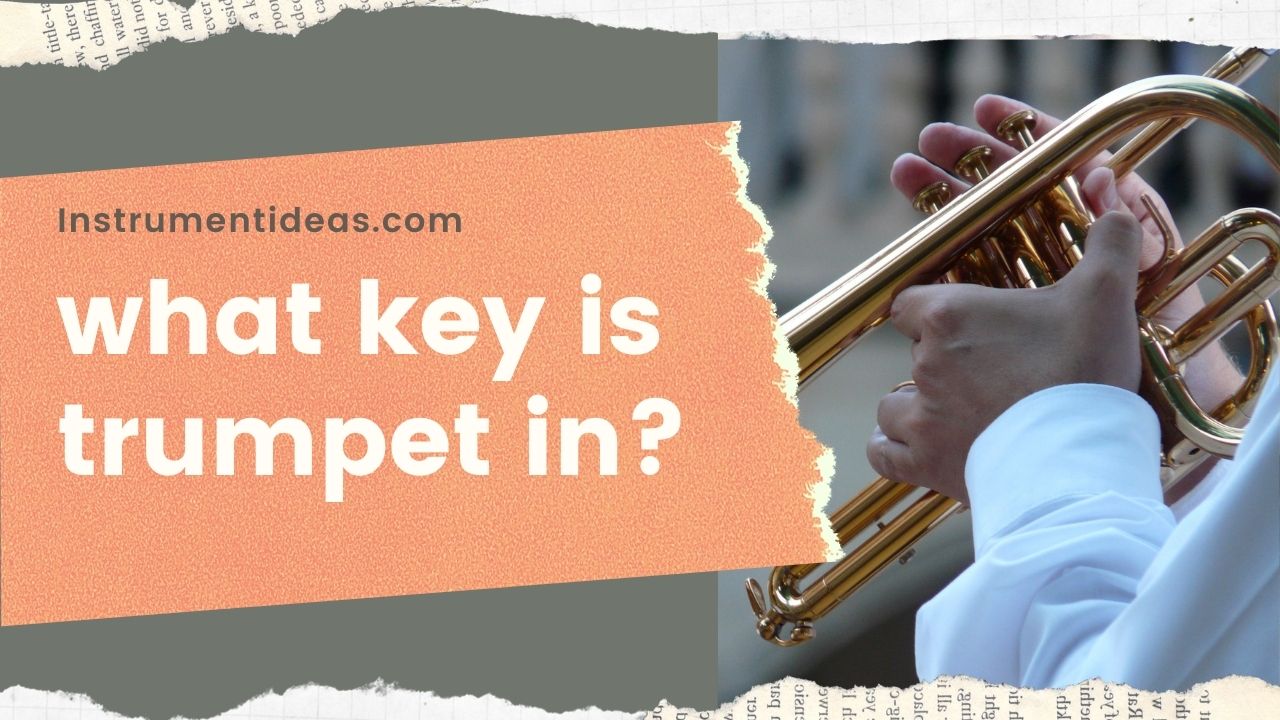 Before going into the details of what the different kinds of trumpets are available and used nowadays, it’s essential to take a look back at what shaped these kinds of musical instruments. The modern trumpet traces its roots back to the Middle Ages and the Renaissance era when its design was first improved upon for use as a musical instrument.

However, as a tool that produces a sound, it goes back to several thousand years back. Archaeological finds of what are believed to be rudimentary versions of today’s trumpets can be dated back up to 1500 BCE but there’s also suggestions that the instrument can go farther back in time.  While many answer the question, ‘where was trumpets invented?’ with ‘Egypt’, there is also evidence that other ancient civilizations have their own versions of this instrument.

The trumpet continued to be developed and refined in design and performance over the years. Unfortunately, it has been relegated to a secondary role by lots of classical composers due to the limitations in capacity of natural trumpets.

To help you get to know more about trumpets, here’s a quick breakdown of the most vital information that will help you choose the one that will suit your needs best.

A Matter of Keys: What key is trumpet in?

So, what key is trumpet in? The standard orchestral trumpet is built in the B♭ or B-flat. This is also the most common kind of trumpet you’ll find in the market today so it can also be the most commonly used by beginners and experts alike.

B-flat trumpets are preferred by many for its versatility. It has a wide range of tones and can blend in nicely with all kinds of ensembles but most especially with other wind instruments. This is also why trumpets are considered to be suitable accompaniments to a wide range of musical genres from classical to modern pop.

It should be noted, however, that trumpets are transposing instruments so it produces a lower pitch than the music written for it. This means that if you’re going to play a C note in it, it will sound like a B♭.

This is done for various reasons. At the top of the list is ease of switching instruments. Transposition is practically a way of standardizing the way of playing such musical instruments, so even if they are different in key, they can still be played the same way and sound the way the trumpeter intends them to.

Other Keys Trumpets are Available In

Aside from B♭, these are also good answers to the question, ‘which key is trumpet in?’:

C trumpets are possibly the next most popular kinds of trumpets since they’re gaining some buzz as of late. They are preferred by professionals and orchestra trumpeters as their higher tone gets to cut through the sound of the group more effectively. It’s also believed to suit string instruments better.

Compared to B-flat varieties, C trumpets also have smaller bodies so they’re easier to handle. It might be because it’s favored by skilled players but it’s also said that lots of users also find it easier to transpose with this instrument. If you’re not yet highly skilled, however, there are always b-flat to c transposition charts to turn to for some help in this area.

The D Trumpet and the E♭ Trumpet

The D and the E♭ trumpets are even smaller in size and higher in range than the C trumpet so they promise brighter trumpet notes and more direct tonal quality. They are usually for solo works and some orchestral ones when faster response is required by the player.

E♭ trumpets are more commonly used than D varieties but they usually have interchangeable slides and bells that can help replicate the sounds of a D trumpet.

The E, F, and G Trumpets

If you look hard, you may also find E, F, and G key trumpets but they are quite rare. Some believe that they’re great additions to a player’s collection but if you can’t find one, fret not. This is where a trumpet transposition chart will come in handy, especially if the part that requires such an instrument isn’t a substantial part of the piece.

Other Kinds of Trumpets

Aside from trumpets in various keys, these brass instruments are also categorized based on their construction and design. Here are a few of the most common types that you’ll find today:

Also referred to as the baroque trumpet, the natural trumpet is the kind of trumpet that doesn’t have valves. It’s long and double folded, nearly twice as long as modern trumpets.

As mentioned above, natural trumpets are seen as one of the main reasons why these brass instruments are demoted in the hierarchical ranks in ensembles. Since it doesn’t have valves, it can only play notes that are already in its harmonic series and even at that, they’re limited to higher ones since more overtunes are available in the said range.

These trumpets are considered as the modern types. They usually have three piston valves which are designed to lengthen the tubing when engaged. This lowers the pitch as a result and creates a variety of responses. When used in combination or in a series, the instrument becomes fully chromatic and capable of playing all twelve pitches of classical music.

You may also find trumpets that use rotary valves instead of piston in their construction. However, these are more commonly found in Germany and Austria.

The modern trumpet is actually quite new.

Other Trumpets without Valves: The Slide Trumpet

Another type of trumpet that does not have valves are slide trumpets. These hail back to the Renaissance period and were originally designed to be moved back and forth by the player. Today, they’re equipped with a moving appendage to make them easier to work with.

How to play the trumpet?

The trumpet is played by blowing air through nearly closed lips. This act is also called lipping or embouchure which produces a buzzing sound that creates a vibration inside the instrument. How your lips vibrate while blowing will affect the kind of sound that you’ll make. Vibrating your lips slowly will produce low notes while the faster you make them vibrate, the higher the notes will be.

In addition to the buzzing of the lips, the mouthpiece also helps determine the sound a trumpet can make. One with a deep cup will generate more mellow sounds while one with a shallow cup will have a piercing, bright sound. It’s not essential to press the mouthpiece too firmly on your lips while playing.

What is the best trumpet brand and model for beginners?

There are lots of excellent trumpets that are suitable choices for beginners. Many manufacturers made sure to offer great selections so they can attract learners. Among the top recommendations are the Yamaha YTR-2330, the Mendini by Cecilio MTT-L, and the Jean Paul USA TR-330.

No matter which one is your choice, beginners should get a trumpet with a friendly design and a consistent and vibrant tone. It should also be made by a reputable manufacturer to ensure quality and reliability.

What about when they say “B flat major”? What does that mean?

The term B-flat major refers to the major scale that is based on the B♭ key. It has two flats and pitches B♭, C, D, E♭, F, G, and A. Since it’s a standard among transposing instruments, it is possibly best known for being one of the most popular keys for concert band compositions.

Why is B-flat the standard key of so many instruments? Wouldn’t C be simpler in most cases?

In the case of trumpets, the B-flat is popular because of its versatility and ability to blend in nicely with other instruments. Its warm tone also makes it more suitable for a wider range of genres.

C trumpets are deemed better options by professionals and skilled players, indeed. They’re also smaller in size so they’re easier to handle. However, there’s a bigger wealth of music written in B♭ for the trumpet. As a result, it’s easier to work with because of the available material. This also makes it a more suitable choice for beginners.

What does it mean to tune an instrument?

‘Tuning an instrument’ or ‘musical tuning’ refers to the process of adjusting the pitch of a musical instrument. It establishes the interval between the many tones that they can have. There’s often a standard used depending on the instrument. Trumpet notation should indicate such details.

How is a scale played?

A scale is a series of notes that is arranged based on a basic pitch or frequency. Learning how to play a scale is essential if you truly want to play any kind of instrument. It’s about stringing notes together so you can make music.

How to Wash a Trumpet?

Finding the possible answers to the question “what key is trumpet in?” is a crucial detail for anyone who wants to learn how to play the trumpet. It may seem like a complicated detail but it’s really not. With all of the things said and covered above, hopefully, you now better understand this basic information about the brass instrument you’re interested in.