When thinking of a good musical instrument to learn, the brass section is always an excellent place to start looking. There are tons of amazing benefits you can get from learning how to play one. However, the options can be a bit overwhelming as they all seem exciting but also quite similar.

Among the top options you have are trumpets and cornets. If you’re torn between the two, this quick guide will help you choose by first figuring out what is the difference between a trumpet and a cornet. 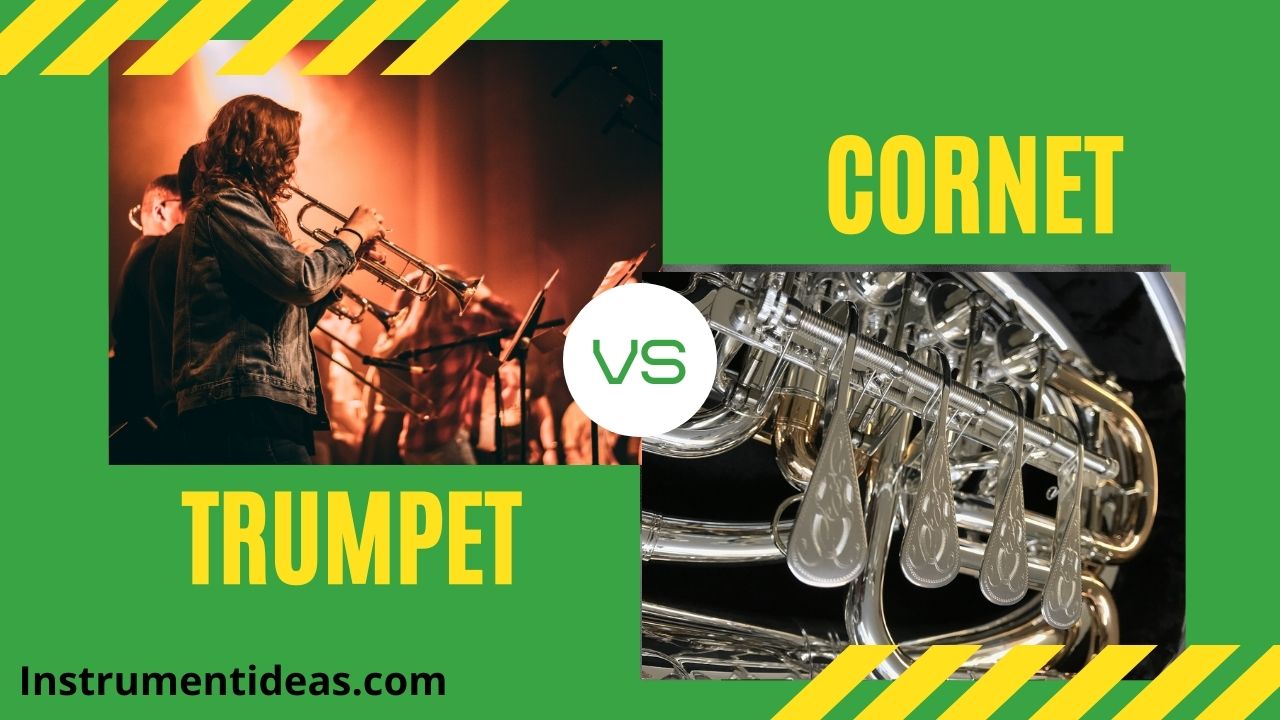 What is a Cornet and How Does it Compare to a Trumpet?

If you have some little basic knowledge about wind and brass instruments, there’s a very good chance that you already have an inkling on what a trumpet is. It’s an aerophone or a musical instrument that uses lip vibrations on a mouthpiece to create a sound.

It’s one of the most popular brass wind instruments there is today, possibly because there are also so many different types available. This might also explain why a lot of people get confused and assume that cornets are trumpets as well.

When you look at the two instruments, it’s not really surprising why people make the mistake. A cornet definition that sets it apart from trumpets describes it as an evolution of the continental posthorn, making it more like a small French horn rather than a trumpet. It’s only developed in 1820s France and during its first years of use, parts for the cornet instrument were written separately by musicians.

With trumpets being around for longer than most people can remember, it’s easy to see why lots of other similar-looking instruments are under its relatively wide umbrella. However, the two can be quite different even if they also share a number of similarities. To better demonstrate these points, below are closer comparisons you might want to take note of.

What is the Difference Between a Trumpet and a Cornet?

There are a few key differences between trumpets and cornets:

The difference in the sounds that they make also define the kinds of parts they play in a composition. Trumpets often carry out fanfare-like passages while cornets take on melodic parts.

The designs for the mouthpieces of cornets and trumpets also set them apart. For the trumpet, they have a more circular rim which provides comfort for the actions players need to make when lipping the instrument. Cornets, on the other hand, have narrower and shorter shanks with deeper cuts.

These designs have a lot to do with the sizes of the receivers the individual instruments have. Since trumpets have more cylindrical chambers, a larger receiver is possible. The same can’t be said for the cornet.

While both portable, trumpets and cornets are different in size and design. Cornets are more compact while trumpets are bigger and longer.

What are the Similarities?

Another way to compare trumpet and cornet is through their similarities. There are quite a few things they have in common including the following:

According to this standard musical instrument categorization, the trumpet and cornet are two very similar items at their core. They’re both described as aerophones which are valved and sounded by lip vibration. In this regard, these two items are practically identical.

The technical design of the modern trumpet and the cornet are pretty similar. The valves of trumpets today are rather similar to the cornet so the same notes and fingerings can be used on both.

This similarity stems from the fact that cornets are developed before trumpets adopted the valve technology that was used to create the cornet. Rotary and piston valves were applied to the posthorn, creating the cornet that we know today. A refined concept was adapted to the trumpet a century later which can explain why certain techniques can be applicable to both.

Interestingly, despite the difference in size, the trumpet and cornet still normally have the same length of tubing. This is necessary to achieve the right key. So trumpets and cornets in the same key should have the same bore length.

The only reason why they’re not the same size is the way the tubing is coiled. Trumpets only have theirs coiled once while cornets have theirs twice.

Trumpets and Cornets for Bands & Ensembles

Brass instruments are considered as social musical instruments since they are often played in bands and ensembles. This is why you can expect to find trumpet and cornet players in such groups.

Trumpets are highly versatile so they can belong in practically all kinds of ensembles. They can be found in the widest range of musical team ups, transcending musical genres. From classical to modern pop and contemporary rock, you might be able to find a trumpeter blowing listeners’ minds away.

Cornet instruments, on the other hand, due to their more melodic nature, can have more specific appearances. Most usually they’re found in brass bands having them as the key melodic instruments in the bunch.

Jazz cornet is also a thing, especially for old style ones. Symphony orchestras and concert brands are also very welcoming for cornet players.

What Effect Do the Similarities and Differences Between Cornets and Trumpets Have?

The fact that an article discussing the answers to the question ‘what is the difference between a trumpet and a cornet’ is necessary paints a clear picture of the huge impact of the similarities and differences cornets and trumpets have. Learning the details can make or break decisions.

The things they have in common make a lot of people confuse them for each other, or make cornets seem like they’re from the trumpet family. Some even think that the two are interchangeable when they’re really not. Sure, with some tricks, some players can create the sound of a cornet in a trumpet and vice versa but they’re really very different.

Unfortunately, this can lead some people with the wrong pick, especially if they decide that they won’t look more into the details of the two.

Their stark differences, on the other hand, can make some people take a pick more quickly and effectively. Preferences can be easily applied once you know more about the details of these two musical instruments.

Due to their smaller size, cornets are better preferred for young learners. They’re easier to hold and the center of gravity is closer to the player so it’s more manageable for someone who still needs to work on their dexterity and balance.

This doesn’t mean that trumpets aren’t suitable for young learners, though. Bigger kids, about age six to ten, can already handle a full-sized trumpet so they can already learn playing it.

Is the Trumpet or the Cornet More Popular?

A very good way to answer the featured question of ‘what is the difference between a trumpet and a cornet?’ is by looking at how popular the instruments are. Trumpets, without a doubt, tend to be more popular for various reasons.

As mentioned above, one possible reason for this is the fact that there are so many different kinds of trumpets available. Aside from the differences in key, they also come in different designs. The categories of valveless and valved trumpets alone makeup a lot of product options for those who are looking for a great brass instrument.

Another reason for this is the longer history of trumpets. Historical evidence shows that trumpets can trace their roots back to the early days of civilization and continuously had a purpose. This helps trumpets endure the test of time.

A good but sad proof that trumpets are further becoming more popular than cornets is the trend wherein trumpets are replacing cornets in ensembles. Jazz bands, for example, initially had cornets in their groups but they were eventually replaced by trumpets for their louder and easier to establish sound.

In mariachi bands, cornets were also the choice before they were replaced by trumpets in the 1930s. It was a choice made to improve the recorded sound of such ensembles. It provided melodic lines and since it was focused and loud, unlike guitars, harps, and violins which don’t record well. Eventually, trumpets became closely associated with mariachi bands even though it was the latest addition.

Which One’s For Me?

Choosing between a cornet and a trumpet depends entirely on what your preferences are as a player. These two horns share a lot of things in common but they have enough differences that will help you choose which one is better for you. You can decide based on which sound you prefer and what kinds of groups you want to be a part of. If you choose trumpet over cornet you can check our top 10 trumpet list.

Is cornet a trumpet?

No. Cornets are only similar to trumpets but they’re not necessarily a part of the said brass instrument family. Cornets are, technically, refined posthorns since that is the base instrument just added with valves by their creators.

Is cornet easier than a trumpet?

Its smaller size makes the cornet easier to handle for those with small hands and arms. However, since they also have similar valve design, the playing part can be very similar for the two. In this regard, both trumpets and cornet are just a tie.

Are plastic cornets/pCornets any good?

Another reason why it will always be hard to answer the question, “what is the difference between a trumpet and a cornet?” is the fact that cornet manufacturers are now also offering pCornets. These are ‘brass’ instruments that are not made with brass but plastic. ‘P’ stands for plastic.

So what about the sound?

What is the difference between a trumpet and a cornet can also be directly answered by: their sounds. As mentioned above, trumpets have warmer, fuller, and more piercing sound compared to the melodic sound of cornets. These can really set them apart and help people choose which one they want to learn to play.

No matter how similar trumpets and cornets may seem, these two are actually very different in many aspects. Hopefully, this guide answers your question of what is the difference between a trumpet and a cornet so you can make a choice which one to pursue to learn.