If you have even just an inkling about the musical instruments that are typically found in an orchestra, you will very likely have an inkling as to what a bassoon is. It’s not necessarily popular but it’s quite unique enough that it can stand out for various reasons.

If you’re here to try to get to know it better, you’re in luck. This article will discuss some of its most basic details and answer questions like “what key is the bassoon in?” among others. 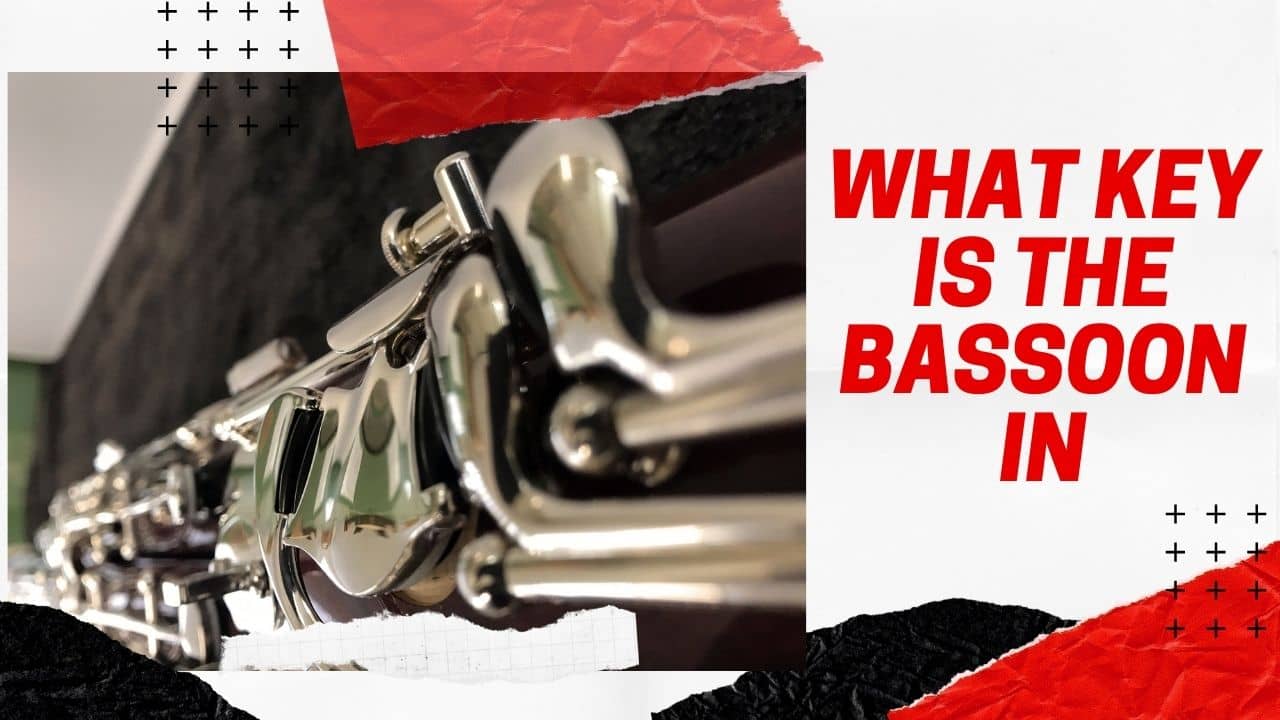 A Quick Introduction to the Bassoon

Before digging into the technical details like what key is the bassoon in, it would be best to learn the most basic things about this musical instrument first.

What is a bassoon, exactly, you might be wondering? A bassoon is a woodwind instrument that is composed of a long pipe which is doubled in half. It’s made of wood and has many keys. The modern bassoon has five main finger holes and another key hole at its front and up to 22 keys in the front and/or back of the instrument.

It has to be held upright to be played and bassoonists normally play this instrument while sitting down. It’s also possible to play it while standing up but the big size can be too cumbersome for a few.

It’s quite a sight to behold as it’s hulking size can seem unusual for musical instruments that you need to blow air into in order to create a sound. It can be quite daunting, especially since it’s also notorious for being quite difficult to learn how to play.

As mentioned above, bassoons are usually found in orchestras. There are typically 2 to 4 bassoonists present in orchestras, depending on their size.

Unfortunately, bassoons are considered endangered in recent years as the number of players are dwindling. Efforts to promote and encourage young learners are being carried out by different groups all over the world.

The bassoon got its name from the French ‘basson’ and the Italian ‘bassone’. However, the dulcian, a similar woodwind instrument was also called ‘fagotto’ in Italian, ‘fagott’ in German, and ‘fagot’ in Spanish and Romanian. This is believed to have come from the old French word ‘fagot’ which refers to a bundle of sticks. There’s some debate, however, about the dating of the word as some believe that the said meaning is used at a later time.

One of the most interesting things about the bassoon is its construction. It’s complex as it can be taken apart in six parts: the reed, the bell, the bass joint, the boot, the wing joint, and the crook or bocal. It has a conical bore, similar to a saxophone or oboe. It has two connecting bores in the boot joint which are joined at the bottom of the instrument by a U-shaped metal connector.

The tone holes and bores are precision-machined but the instrument is hand-finished in general to achieve proper tuning. Some walls are thicker than the others in order to achieve the sounds it’s meant to make.

Modern bassoon reeds are frequently made of Arundo donax cane. Since advanced and professional bassoonists often make their own reeds, they are easily available in their unpolished forms from retailers.

Of course, ready-made and professionally made reeds are also available but most bassoon players find that they still need some adjustments to better fit and suit their playing styles. This is why learning this process can become a part of the process of mastering the instrument.

With how complex the bassoon is, it can be expected that it’s a relatively new creation compared to other musical instruments that are used in classical music. Modern bassoons have been around since the 17th century but they’re believed to have been developed from several instruments (the rankett, shawm, and the curtal or dulcian) that became prominent in the 16th century.

Among the three, however, the dulcian is the only one with a folded appearance so it could be the closest predecessor of the bassoon. Because of these uncertainties, some think that the modern bassoon is more of a new invention other than an enhancement of an older version. Such speculations are strengthened by the fact that dulcians were continuously used even after the bassoon was created.

Who invented the bassoon, you ask? Since there’s still belief that the bassoon is more of an improvement, it really can’t be definitively said that it was invented by one person. However, many believe that Martin Hotteterre, also known as Jacques-Martin Hottetere, a French musician who hailed from a large family of woodwind instrumentalists, developed the bassoon to its modern form. He’s also known for inventing the baroque oboe and the flute traversiere.

The bassoon that is used today is believed to be a product of the refinement process the said instrument went through in the 19th century. The trends in music demanded greater volume and better playability from the instrument so it was further improved. Today, the bassoon is available in two forms: the Heckel (German) system and the Buffet (French) system.

The Heckel system was developed in the early 1800s and features a 17-key design. It got its name from JA Heckel and his family who continuously refined the design for generations.

The bassoon range of this instrument is four octaves. It gained prominence over the years because of its superior singing tone quality. Further refinements helped make it become the standard over the years.

The Buffet System, on the other hand, is developed earlier than the Heckel system and is more minimalist in its approach. It has more keys (22) so some players find that controlling its intonation can be trickier. However, it offers a quality that is more expressive and vocal. This system is less widely used but is still popular in France.

What Key is the Bassoon In?

Moving on to the main point: what key is the bassoon in? The bassoon is in the key of C and is notated in the bass clef but the tenor clef is also used for the highest registers. Bassoon music is also notated and is a non-transposing instrument.

Why is it written in bass clef and not in treble clef like other instruments? Some think that it’s because of the natural bassoon range while others think it’s because of its long joint and bell. Lots of bassoonists find this particular detail odd and it might contribute to the challenging nature of the instrument.

If you’re wondering what key is flute in or what key is oboe in, the answer will be the same. In fact, even the contrabassoon or double bassoon is pitched in the key of C.

Is there music for the mini bassoon in the key of G?

If you’re considering a mini bassoon instead, you’d be glad to know that there’s a growing amount of music for the mini bassoon in the key of G. Despite the novelty of this musical instrument, more and more music for it is being written as it gains more prominence. Teachers also often transpose music for this particular instrument.

Do bassoonists really need to use the resonance key?

With its placement and seemingly inconsequential purpose, it might not feel necessary to use the resonance key. However, it’s more of a bad habit because you’re supposed to use it. It enhances the sound of higher notes, affecting their timbre and tuning. It’s just that it can be quite hard to use that those who do not hear the significant difference of using and not using it feel like it’s alright to skip it entirely.

What is the highest note a bassoon can play?

It may not seem like it but the bassoon range is among the largest there is. It can hit the low B flat to a high F.

Is it hard to learn the bassoon?

Is the bassoon harder to learn than the oboe?

Compared to the oboe, the bassoon can be more complicated and more challenging to learn. There are lots of things to take into account when playing the bassoon to get a good tune so many find it harder to work with. Developing the right techniques is key to mastering it.

There’s so many great things about the bassoon that make the instrument very interesting to know about and learn. Hopefully, the discussions of what key is the bassoon in and many of its basic details help you find the information you need about this particular woodwind instrument.